ADS-B Analysis of FlyDubai 981: A Case of Somatogravic Illusion?

On Saturday 19th March, I had just stepped outside my house to grab a taxi to go to a weekend meeting when I received a phone call from Moscow, regarding the FlyDubai flight had crashed in Rostov-on-Don with over 50 killed. I could not go on air immediately due to the meetings but after reading a bit on the wreckage, ADS-B information published by FlightRadar24, several aspects became apparent and at 0831UTC voiced I my opinion.

I did write about fatigue somewhere but it seems that I can’t remember where I said it, but… At 0900UTC I went on air at Russian Times TV voicing that opinion (including fatigue), as I did not agree with the speculation that there was an engine failure, or that the aircraft had hit the ground prior to the go-around, because the facts available then, did not support such theories.

I decided to get to work on this accident. It took a bit to understand the mechanics involving the accident, and much work still needs to be done, but after one week, I feel that I owe my blog readers and social media followers what I found on this accident.

My view remains that spatial disorientation compounded or caused by fatigue is a major cause of the accident (amongst others).

Today’s High Performance Airliners – Hotrods that can surprise you!

The problem is that these airliners have the engines slung below the wing, so from a low-weight approach speed and trim, during a go-around one could experience rapid nose up movement of aircraft, and or, rapid acceleration or deceleration, depending on the pitch angle resulted. Regardless, it is not rare that one would have to fight the pitch up moment both with the yoke and with the trim switches. Whether the crew had to fight the pitch up moment in this case, needs Flight Data Recorder information. Here’s another eerily similar case in Russia involving a 737-500:

This was the case of Tatarstan Airlines flight 363, where upon executing a go-around, the nose-up moment generated by the engine thrust, the aircraft started to climb, reaching the pitch angle of about 25 degrees and the Indicated airspeed began to decrease as the crew retracted the landing gear. The crew did not provide positive control inputs through the yoke initiating the go-around maneuver resulting in decreasing from 150 to 125 knots, the crew then started control actions through the yoke, pitching nose down, which has led to stopping climb then starting descent and increase of the airspeed. Maximum angles of attack have not exceeded operational limits during the flight (aircraft did not stall). After reaching the altitude of 700 meters, the aircraft started a steep nosedive, with the pitch angle reaching −75° by the end of the flight (end of the recording).

But I wasn’t satisfied with this explanation alone, and the ADS-B data revealed a significant acceleration in the aircraft’s groundspeed during the climb. A friend (or more like my teacher), wrote about an acceleration-based sensory illusion several times during discussions of various accidents in the past, and I think we both suspected this could have played a part in this accident.

Somatogravic Illusion typically occur during the missed approach or go-around segment of a flight at night or in IMC when speed is slow, power is rapidly applied and the aircraft then accelerates rapidly. As no visual cues exist, this generates a strong ‘tilt back’ sensation which the pilot interprets (incorrectly) as a rapid pitching up sensation while the aircraft may still actually be in a level attitude or only a slight climb. This is the somatogravic illusion.

If the aircraft nose is simultaneously raised, the pilot has a very strong sensation of climbing. The illusion of false climb tends to lead the pilot to lower the nose and descend. The aircraft then accelerates and the illusion can intensify. Pilots cannot rely on their senses and must confirm the aircraft’s nose-up position using the attitude indicator on the primary flight display (PFD). Fatigue however could result in the pilot following his basic natural instinct rather than training.

How does somatogravic illusion and fatigue fit in with the leaked information leaks?

We can ascertain that the crew did a single autopilot approach, which was normal. When they aborted, they pressed the TO/GA switch to put the aircraft in the go-around mode. Since this is done below 2000’ above ground, the autopilot disengages. One can always re-engage it as long as no force is applied to the control yokes and the stab cutout switch is at normal.

The leaks seems to have resulted in confusion regarding the stabilizer trim. I’ve been in situations where translations can cause confusion through the media, so, I looked at a version that to me sounded well translated:

After the plane’s captain decided to attempt a second attempt at landing, the Boeing reached an altitude of 1500 meters.

“Ascent continues automatically for 40 seconds,” the source reportedly said. “For unknown reasons, the captain disengaged autopilot before the plane reached that height. Maybe the plane ran into ‘atmospheric scissors’ (pilot slang), which could severely shake it. And the moment the autopilot was cut off, the Boeing dives to the ground.”

According to the transcripts, one pilot told the other, “Don’t worry, pull!” Reporters cited experts who believe that, after the autopilot disconnected, the captain attempted to level the plane, but for some reason the vertical stabilizer was turned on after the nosedive. It is possible that, during turbulence, the captain accidentally pressed the thumb controller as he was cutting off autopilot. He likely didn’t notice it because he was extremely exhausted. As a result, he couldn’t navigate the plane, and the pilots were unable to determine the problem.

I think this version can lead to the following chain:

Remember, according to ATC recordings, the crew requested an altitude quite high as their desired altitude after a go-around, so they wouldn’t be in a rush to level the aircraft off. Even at 4000fpm, at 4000′ they still had a minute to reach FL80.

Recent leaks have indicated that the aircraft may have stalled. Unfortunately these leaks have come through unnamed sources, and while we cannot rule it out as we do not have the flight data recorder information, based on on the ADS-B data, it can be said that a stall was unlikely. Why? Let us revisit the following plot: 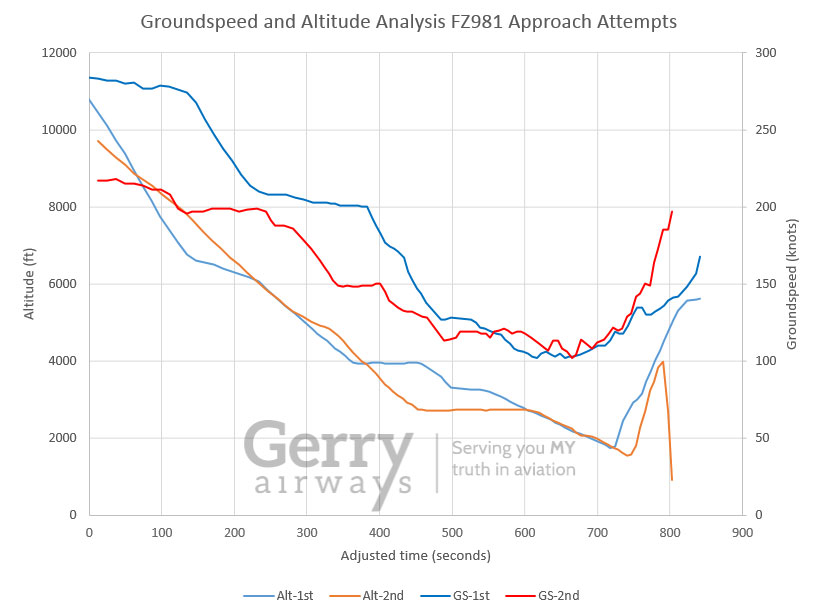 We can see that on the second attempt, for each altitude, the groundspeed after the go-around were generally higher than prior to it. Despite the raising of flaps from Flaps 30 or Flaps 40 for the approach to Flaps 15 for the go-around, a stall or an approach to stall was unlikely.

While various leaked information hinted at stall, none mentioned the stall warning or stick shaker being heard. The latest leak indicating that there was disagreement between the pilots, indicates that one pilot was uncomfortable with the steep ascent and probably the acceleration (hence: somatogravic illusion), and then one wanted to continue the climb while the other wanted to lower the nose.

OK, before anyone shouts can’t they train to anticipate this illusion in the the simulator, there are a few points to remember:

We must remember that this accident happened during a go-around when the aircraft was very light. The pilots (at least one of them) were probably not used to the rapid acceleration and steep ascent, and one does not usually train for an extreme lightweight go-around.

While Somatogravic Illusion in my opinion forms a strong case on what may have caused the aircraft to dive, there will be other factors being investigated by the accident investigators, MAK. Despite the leaks, MAK have consistently refused to comment on the leaks (as they should), and that they have stated they will likely be making a statement on their initial findings within the next week or two.

Other cases of Somatogravic Illusion: