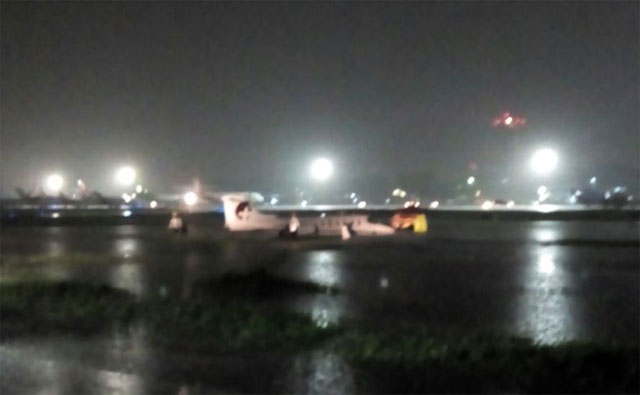 Last night, amidst rain storms that covered Jakarta, a Nusantara Air Charter Learjet 31 registered PK-JKI slid off the runway at Halim Perdanakusuma International Airpot (HLP/WIHH) in Jakarta at 1946 local time (1246Z). As a result, the airport was closed for almost 3 hours, causing disruptions to scheduled flights. Inbound flights that were immediately affected were:

Some passengers were bused to Soekarno-Hatta International Airport (CGK/WIII) in order to catch flights from there while waiting for the runway to reopen.

PK-JKI was operating a medical evacuation flight from Yogyakarta Adi Sucipto Airport (JOG/WAHH), and arrived in Jakarta area about 1 hour after rainstorms occurred. Various flights operated into Halim Airport on the ILS runway 24. The Learjet 31 slid off the right-hand side of the runway and rested on the grass between taxiways Bravo and Charlie. The weather conditions at the time was 1000m visibility with winds at 8-13 knots (direction not reported).

According to early reports, the aircraft contacted Halim at 1233Z, and commenced approach for ILS24 at 1244Z following a Batik Air 737 a few minutes ahead of it, and the weather information were relayed to the crew. At 1246Z the aircraft slid and the crew made a radio transmission just prior to skidding (likely inadvertently). The crash alert was immediately activated and fire and rescue as well as ambulances were immediately on scene. 7 persons were on board and were evacuated safely.

One of the NOTAMs issued last night regarding the accident:

This was later extended to 1545UTC in a follow up NOTAM.