Low levels of trust between the passengers and the airlines equals strange mishaps!

I was sent an interesting picture the other day… 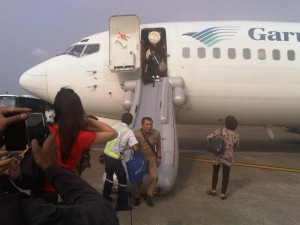 It was taken by one of the passengers onboard that aircraft…

When the aircraft pushed back and started its engines, a tailpipe fire occured. The residual fuel in the combustion chamber and turbine blades of a jet engine produces smoke and fire on the next engine start. Whilst it’s no big deal, it could cause concern for those who never saw one and do not know what it is. Normally, if someone raised the concern, the cabin crew would just assure them that it is normal… unless you’re in Indonesia.

Why didn’t the passenger heed to the cabin crew’s call to remain calm? The answer lies in Indonesia’s airline industry history since 2000. The boom in the industry meant 2 things:
1. Accidents.
2. Lots of incidents.
3. Lots of delays.
4. Lots of stress for the passengers.
5. Passengers losing trust but still flying.

Whilst the first 3 can be solved by proper enforcement of the operating regulations and industry best-practice preventative measures, the latter 2, are tricky.

What didn’t help was the industry’s method of “hush-hush” and “just tell them a lie and the rants will go away” to solve problems between 2000 and 2007. Whilst not all airlines are guilty, the multiplier effect of just 1 frontline staff doing it, cannot be underestimated.

The multiplier works by other staff thinking, “hey, that worked, so I’ll start doing that too!” Then the line managers starts adopting the same method and before you know it, several companies would adopt the same method.

Sweeping the problem under the carpet works in the short run. Eventually, one will just go too far and the passenger snaps the weakened chain of trust. The airline most guilty of doing this was the now-defunct Adam Air… and one other carrier who allegedly utilize the method on a regular basis, still exist, and is still flourishing somehow (no, it’s not Garuda).

What airlines need to know is that even if the passengers hate you, put the price low enough and the haters will still fly with you. If they’ve had enough, they don’t stop flying, they fly someone else. Unfortunately, they bring their trauma and distrust along with them even when they fly someone else!

Whilst the industry’s safety record has improved significantly since 2007, my perception seems to indicate that incidents of “unruly/panicked passengers” are on the increase. The lag of the peak of occurences can be understood, but does the industry realize this?

Last year (I think), a tailpipe fire resulted in the same thing… 1 Batavia Air passenger panicked, overwhelmed the crew, and opened the door and jumped out. Since 2007, this appears to have occured at least once a year, but the other ugly behaviours are increasing.

Delays (even by weather), now begin to produce increasingly confrontative and angry passengers. Just last week, we had 2 crew members walking through the terminal were “detained” by passengers who held the hostage unless their delayed flight, departed immediately. A few months ago, a passenger on a rampage after “attempts to hush” him failed and several terminal information displays were destroyed along with 1 x-ray machine giving up after it was bumped during the rampage.

This does not limit itself to “bad carriers”, Garuda suffered this, Air Asia also had “passengers detaining crew” due to delays (despite winning the Best Low Cost Carrier award). A Sriwijaya Air tech delay resulted in Jambi Airport being taken over by its passengers to prevent the crew from leaving the airport 1 – 2 years ago… The worst case, was around that same time when a Sriwijaya Air passenger was denied boarding in Ambon and he decided to call his friends in Jakarta to do a drive-by shooting at the airport…

And these are just the stuff I hear or made it to the news… I dare not think how many other cases had occured. But what surprises me the most is when I discuss it with people working at the airlines or the airport, their reaction was, “How do you know?” or “Hey, you’re not supposed to know that!”

As long as there are those preferring to hide these kinds of problems and incidents, no matter how minor, it’s a safe bet that “silly incidents” will increase! I wonder how long/short we’d have to wait until someone does get killed at the airport for some silly/insignificant altercation or delay…

But, in the meantime, let’s be relieved that no Tristars (God Bless them!)are in service in Indonesia! Just have a look at the following:

Photos by: Mick Bajcar, Lasse Lehtonen and Viktor Laszlo via Airliners.net
With engine starts like those, and the passengers we get in Indonesia these days, am sure aircraft escape slides would be a best seller if Tristars are in service today!!!!!

Photo by: Mathias Henig via Airliners.net
They might as well open their own slide production plant next to the airport!

As bad as all the stories I hear about passenger service in the US, those frontline staff there should feel lucky they’re not in Indonesia!