Ground Collision between Scoot 787 and Emirates A380 at Singapore Changi 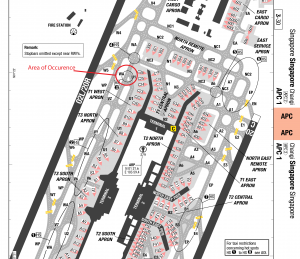 Area of occurence in the red circle.

9V-OJA was taxiing from the eastern side of the airport via A6, NC3 and turned left onto WA where its left wing collided with the right wing tip fence of A6-EUB, pushing back from stand C23.

As a result of this incident, Emirates EK405 Singapore – Dubai  (MEL-SIN-DXB) was cancelled, and 9V-OJA was towed to the  Northern Remote Apron (parking stands 307-310) and 9V-OJE was called in to operate TZ188 which departed at around 6am Singapore Time.