As the search continues to find Egyptair MS804 (SU-GCC), speculation begin to surface as to the cause of the tragedy. While many point towards terrorism, I tend to keep an open mind and not fall to the “bandwagon” syndrome. A piece of information about the flight paths final moments were revealed by Panos Kammenos, the Greek Defence Minister based on military radar information, stated that “it turned 90⁰ to the left and then a 360⁰ turn towards the right, dropping from 37,000 feet to 15,000 feet.”

The Times newspaper made an illustration on it’s understanding of the above piece of information. 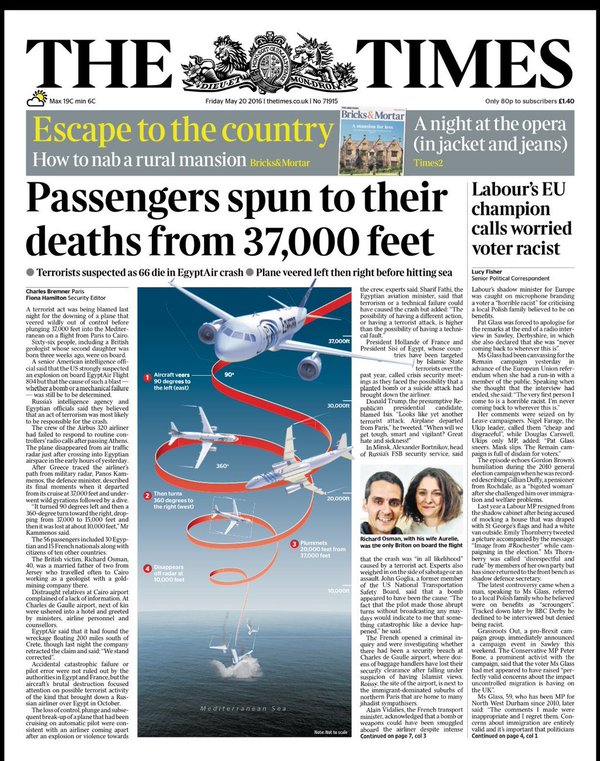 Whilst Russian and Egyptian authorities, according to The Times, believed that this was an act of terrorism, the information provided by the Greek Defence Minister, in my opinion, says that there is a possibility that it isn’t.

A case of decompression?

An aircraft suffering rapid decompression at high altitude would need to descend to 10,000 feet as quickly as possible. However, making these kinds of descents can result in risk of collision amongst other aircraft along the same airway. With descent rates that can exceed -6,000 feet per minute, you really don’t want to have a TCAS warning whilst doing the emergency descent. So the solution is, and is standard emergency descent procedure, to turn 90⁰ to the left or right (depending on the situation), to get away from airway and minimise collision risks with anyone else on the airway. After you get away from the airway, you then bring yourself parallel to the airway, to minimize your chances of losing your bearings and end up in another airway. This can explain if the MS804 had a 90⁰ left turn followed by a 90⁰ turn to the right.

An example of this 90⁰ turn followed by an opposite 90⁰ turn was during a decompression case I followed a few months ago. In this case, another A320 operated by Citilink operating flight QG861 had a decompression and the crew decided to make an emergency descent with those 90⁰ turns.

So why did they continue the right turn into a 360⁰ turn?

This is of course, the multi-million dollar question at the moment. On the case of QG861, I interviewed the captain of this incident (he happens to be a good friend of mine), and I showed him his flight path, and he asked, “Did I really exceed 90⁰ heading change on the initial turn?” Our conclusion was that in extreme attitudes, one’s skill and judgement is tested, and the risks of becoming disoriented went significantly higher than normal.

Of course there may be major differences between the two cases, but let us remind ourselves of the situation with MS804. QG861 happened in daylight hours while MS804 happened during the early hours in the morning, quite likely fatigued, and right inside what I refer to as “disorientation black hole” (for lack of a better term). The turning maneuvers if not done correctly, could have resulted in the aircraft entering an upset attitude, which if not corrected, could lead to loss of control or inflight breakup. Cases such as Ethiopian 409 in Beirut, Kenya Airways 507 in Douala and even Adam Air 571. But these thoughts of decompression and disorientation are just “ifs and maybes” at the moment, but to me, they look more credible than the “if it turned like it did then it had to be unlawful interference” or “it has to be a terror attack” bandwagon calls.

OK, now if it was decompression, what caused it?

It could be anything. While an act of terror is possible, it doesn’t have to be, but we will find out the clues to point us in the right direction once the wreckage is found.