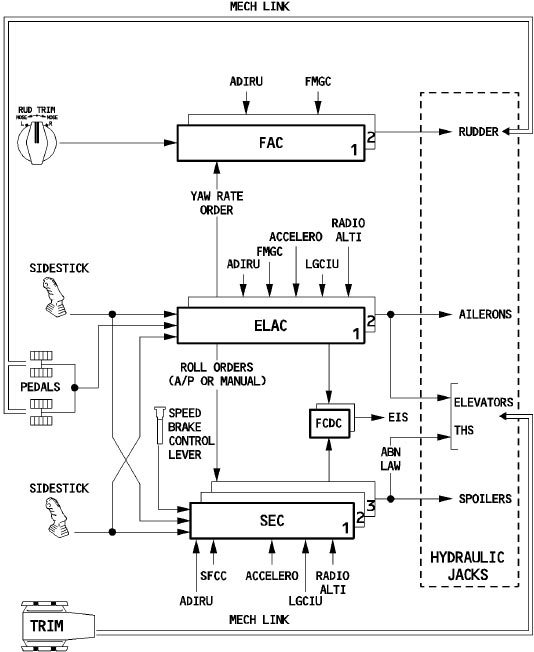 Whenever there is an Airbus accident, there always seems to be confusion in public and even expert comments on what computers are supposed to be doing what. QZ8501 proves to be no exception.

The A320 has fly-by-wire (FBW) flight control system, meaning that inputs made by the pilot or autopilot are processed through a series of computers and gets translated into a safe output, keeping the aircraft safe from dangers such as rolling over, overspeed, or stall, etc. It’s architecture is however, a bit more ancient than that of the A330/340/350/380, which use 4 Primary Computers and 3 Secondary Computers.

When all the inputs are correct and all the above computers are running normally, the A320 is flown in what is called Normal Law, which pitch is controlled by Load Factor (how many Gs you want the airplane to do, neutral = 1G), roll is controlled by Roll Rate, and Yaw control provides turn coordination (to prevent you from skidding or slipping in a turn), and yaw-damping is provided automatically.

Under Normal Law, the airplane provides protection from erroneous or dangerous inputs that can put the aircraft in harms way, such as pulling up too much causing you to stall, or rolling upside down.

A320 FBW Alternate Law: When you have errors

When there are enough or critical errors in the FBW, the FBW cannot provide protections and will degrade from Normal Law, into Alternate Law. Have more problems, and you will degrade into Direct Law, and the last resort is Mechanical Law. I will not discuss the latter two as it is outside the scope of this accident at the time of writing this article.

The following errors or faults can reconfigure the FBW from Normal Law to the other control laws:

The above diagram shows that if you have sensor input errors or FBW component faults that prevents the FBW from operating safely within Normal Law, the FBW will reconfigure itself. This is basically the FBW saying to the pilot, “I cannot protect you with my current situation, so please protect yourself.” It will give an audible alarm for the pilots to hear, and display the fault and effects of the fault on the bottom center screen in the front panel, so the pilot would see what’s wrong and act upon it when appropriate.

The Flight Augmentation Computer: What does it do?

One part of the FBW that is raising a lot of interest with this accident is the FAC. Here we see that the FAC controls various rudder control functions.

Here we se the rudder control functions in more detail and see that the function of the FAC isn’t as simple as it first looks.