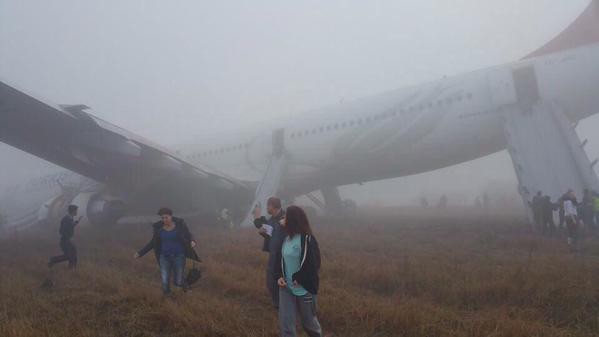 A Turkish Airlines Airbus A330 was landing at Kathmandu Tribuvan International Airport in Nepal when it left the runway and came to rest between runway 02 and the parallel taxiway.

Based on ADS-B data collected from Flightradar24:

Weather appeared to have been ground cloud or fog. From photos taken during the evacuation it appears that visibility appears to be much less than the minimum for RNP 02 approach, which is 1500 meters for CAT D aircraft.

1 passenger is reported to have been injured.

It is still early in the investigation as to the cause, but Nepalese authorities are already saying that the aircraft had to land, perhaps implying that it was running out of fuel. This can be due to the 1 hour 31 minutes it took since holding to the time it landed. Let us await the formal announcements.