OK, it’s not MH370, or part of a ship but maybe the H-IIA or H-IIB rocket instead

I wrote earlier about the piece of debris found off Thailand that was suspected to being a part of MH370 and how I think of it’s unlikelihood. I also wrote that I’d love to be wrong about it, and I am extremely happy to say that I’m wrong. It doesn’t seem to be a part of a ship’s superstructure as I mentioned in that article.

As I went to bed last night, others were tweeting away about other alternatives. If MH370 is like the past haunting me, this episode is no exception.

Now, several years ago at one of my previous employer, we were looking to launch a satellite (the project has been cancelled since though). We entered into discussions with Mitsubishi Heavy Industries and was offered to launch our satellite using the H-IIA/B which I will refer to as H2A and H2B instead) family rocket. That, like Inmarsat, was in my past, but MH370 seems to keep haunting me with my past, but that’s a story for another time.

While Jon pointed out the debris is from the H-IIA (H2A) rocket, I would like to point out a key dissimilarity.

The H2A shown by Jon has a straight cylindrical fairing:

The debris found on the coast, is not a straight cylinder:

But WAIT! Before you dismiss this as “not from the H2A rocket”, I want you to have a look at the H2A and H2B rocket family, to see what variants are available:

As we can see, there are some fairings available that can be larger than the neck of the rocket, and that is not limited to the H2B. The H2A variant shown above is the H2A202. Have a look at the H2A204 below:

Both the H2A and the H2B can carry the wide payload fairing, which is made by Kawasaki:

Some of those who read my previous article would probably now like to ask some questions:

1 – What about the wires seen on the debris? 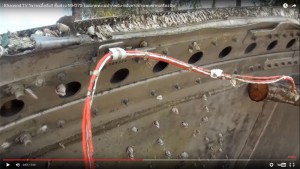 Well, we can see here:

You can see the cable there at the bottom, and see that there are not that many pieces of wiring on the fairing.

2 – What about protrusions you mentioned? 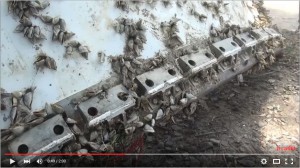 These protrusions can be found on the latches used on the H2 5S series fairings. Zoom on the photo below to see:

We can see that panels 307 and 308 are located quite close to a doubler with fasteners. We can see a similar arrangement of the panels, writings and protrusions here below:

The photo from the debris found above is likely to come from the other side of the circle from the photo above. See the photo of the fairing prior to the assembly, and the arrangement of the 2 round panels along with the fairing edge and protrusions.

How I see this is that it is pretty conclusive that the debris found is not from MH370, although we can’t say which rocket it came from, that’s for the Japanese to decide.

Now, I guess some of you will be asking, “Hang on, the Japanese don’t launch rockets often!” Well, Mitsubishi has been actively marketing the H2 family rocket since 2012, trying to capitalize on some of the failed launches of the Russian Proton launchers. They’ve grabbed one pure commercial launche since then in addition to the Japanese’s own and international space programs. Here’s a list of H2A launches since March 2014:

Back to the original point again, I’m very happy that I was wrong in guessing that this piece is from a ship’s superstructure, because it is more likely to have come from either H2A-F29 or H2B-F05 rockets. Now this could explain why there are less barnacles attached to it than people expected. But one thing is for sure, this is NOT from MH370!

If you’re curious on why the payload fairing didn’t burn up upon re-entry, read my next article (click here).